Film / Back From The Front 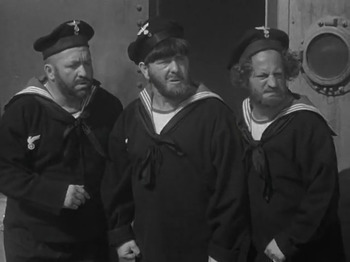 Moe: If we're discovered, we're lost.
Curly: You're crazy. If we're discovered, we're found.
In this 70th short, "Back from the Front" has the Stooges coming across a Nazi ship called the S.S. Schicklgruber, to where they must disguise themselves to not be recognized. Little did they know, their former boss of their sunken ship of the Merchant Marines, Lieutenant Dungen, was aboard.
Advertisement:

This is yet another jab at the German Nazis, after "You Nazty Spy!", "I'll Never Heil Again", and "They Stooge to Conga".