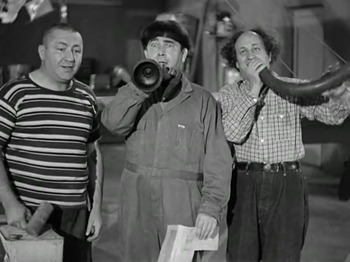 Da-da-da-da-da-da-da-da-da! A flying we will go!
"Republic of Cannabeer, P.U. Draft Board No. 145 I.O.U.
Wrong Brothers, R.F.D. Stincoala, Moronica.
Sirs, this draft board has decided to extend to you a thirty day deferment from military service. This is based on your claim that you have invented an airplane that will revolutionize flying. However, if at the end of thirty days you have not proven your plane to be all that you claim it is, you will be inducted into the service.
Very truly yours, Joe Strubachincoscow."
Whew, what a moniker.
— Moe, first lines in the short.
Advertisement:
Dizzy Pilots is the 74th short subject released by Columbia Pictures in 1943 starring American slapstick comedy team The Three Stooges. In it, the Stooges are known as the Wrong brothers, a trio of aviators in the "Republic of Cannabeer, P.U." who receive an army draft notice. The notice says the brothers have been granted a 30-day deferment of duty on account of their claims that the plane they are inventing, the “Buzzard”, will revolutionize flying. Curly proudly announces that their plane has put them among other "great inventors" like Robert Fulton, Thomas Edison, Alexander Graham Bell and Don Ameche.

The boys get to work, but a series of mishaps cause them to get sidetracked; Moe twice gets knocked into a tub of rubber cement. The first time it happens, Larry and Curly try to get the rubber off Moe by expanding the rubber with hydrogen. Unfortunately, Moe floats to the top of the airplane hangar and into the sky, and Larry and Curly take aim with a shotgun and blast him to safety, resulting in Moe falling down a nearby well. The project is plagued by more mishaps, including a disastrous test flight. As expected, the Stooges are drafted into the army, where they run afoul with their drill sergeant (Richard Fiske), disrupting marching and weapons handling drills. This part incorporates Stock Footage from the 1940 short Boobs in Arms.