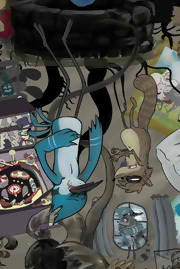 Regular Show Slash Fic - It's anything but.
Advertisement:

Or as many people refer to it, August is a Regular Show fanfic written by ThatRegularBro

of FanFiction.Net. It's also basically a Slash Fic but with Hidden Depths...very hidden depths.

Summary from the author: "It's not like Rigby wants to feel the way he does. He just does. And he's struggling to keep his feelings to himself. I don't think he can keep this up for long... Meanwhile, the creature that dwells in the dump grows impatient." That only gives away the first part of the story out of more than thousands of words written in each chapter.

It starts with them waking up to another job that both of them doesn't want to do. Their first task was to collect the bags full of garbage. After some horsing around in-between that, they went to the dump where a tentacled monster eats the garbage. It all sets the story in motion here when Mordecai was heavily injured by the monster and Rigby getting poisoned from drinking some of the monster's blood for biting it. It doesn't end there yet as the story is about to progress to how the two characters really feel for each other.

A must read for fans of this pairing. Start reading here