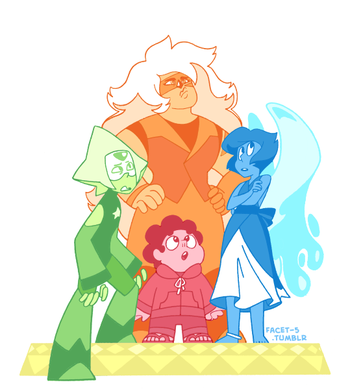 A fanmade Alternate Universe of Steven Universe, where the positions of canon gems are swapped around, so the surviving Crystal Gems are Jasper, Lapis Lazuli, and Peridot, instead of Garnet, Amethyst, and Pearl. Jasper is usually depicted as the leader, Lapis Lazuli as the fun-loving one, and Peridot as the perfectionist. Sometimes Garnet is still a fusion and sometimes she's not, but she is usually The Brute of the Homeworld Gems. Amethyst is sometimes stuck in some gem device, but she's sometimes just living wild, like she was in canon before the Crystal Gems found her. Sugilite is the terrifyingly-unstable forced fusion of Garnet and Amethyst. Pearl is usually the low-ranking gem sent to check in on the Cluster.

Whether or not the swap extends to other gems is up to the interpreter. Sometimes Connie replaces Steven as the half-gem, but most of the time she doesn't. Sometimes Rose Quartz (called Pink Diamond in this case) is swapped with Yellow Diamond as the Crystal Gems' late, beloved leader and Steven's mother and the fearsome ruler of Homeworld, respectively. Sometimes Bismuth is included in the swaps, but this often isn't the case as the AU predates her introduction.

Has a fan episode, "The Smothering

Tropes usually used in Momswap include: