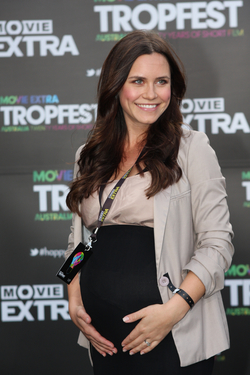 Saskia Burmeister (born 12 February 1985 in Sydney, Australia) is an Australian actress from Sydney. In high school, she acted in plays such as The Merchant of Venice, and her first major role was in Wicked Science from 2003 to 2004. After that, she gained critical attention by starring in Hating Alison Ashley, which won her a nomination for Best Lead Actress from the Australian Film Institute (AFI). She later won an acting award from the AFI for a guest role in Blue Heelers, and received another nomination for The Jammed.

From 2007 to 2009, Saskia was on Sea Patrol as the navigator Nikki Caetano. In 2011, Saskia joined Home and Away as Tegan Callahan. She also appeared in Underbelly: Razor. Her upcoming projects include Black and White and Sex, Min Min, and Tricky Business. She has been married to Australian actor Jamie Croft since 2008, and in 2012 she gave birth to their first child. Her sister, Martika Sullivan, is also an actress.