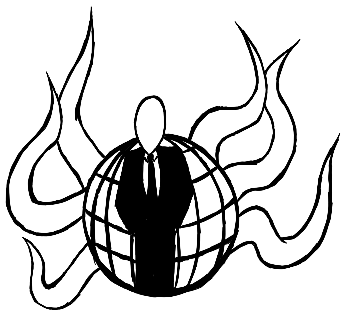 How fast we grow, we must move on.

And this is what my job is, just another example out of thousands every day: It is my trained judgement that filters out the Fossils from the accounts. I like to think I use some kind of future vision to spy where the FT-BUREAUCRATIC RED TAPE is going to appear, and then I apprehend it justly with my scissors of coherence. I am the saviour of bureaucracy, along with my many coworkers.
Apply today!

is a doozy of a story, spanning fifteen separate blogs written by DJay32 and Alliterator all linked through two central horror stories that sing together in harmony.

The overall plot is this: The Topography Genera Center has hired Doctor Cloud, a bold scientist whose research arguably proved the existence of the mighty "fossil particle," and with it the implications of unnatural beings (deemed "Fossils") and Rainbow Gravity Theory. But the research that the Genera asks Cloud to do from here on out seems a lot less grandiose and a lot more suspect. Meanwhile, a lowly intelligence worker by the odd nickname of "Liquid Len" finds more and more hints of a rising antagonistic consciousness that no one wants to admit exists. And somehow, all of this is connected through a series of unrelated blog accounts and phone conversations.

The fifteen blogs of Topography Genera were written for TheFearMythos and altogether meant as a spiritual successor to one of its original blogs, Jordan Eats Normally Now. They have all concluded now. DJay's contributions have been edited and published as a novella.

A Full List of the Blogs of Topography Genera