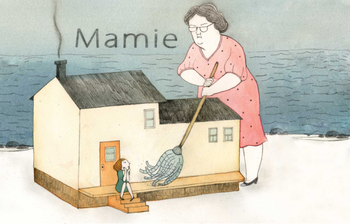 "I wonder why Mamie was never interested in me or her other grandchildren.''
Advertisement:

is a 2020 animated Canadian short film, where Janice Nadeau recounts her memories of her grandma, Mamie, in a story about the breaking the cycle of passing things on.

A few things that we know about Mamie: She lived in a house by the sea, where none of the windows face the sea, she hates travelling, and that she's not interested in her grandchildren. Janice wonders what made Mamie so indifferent.

See it on the NFB's official Youtube channel here