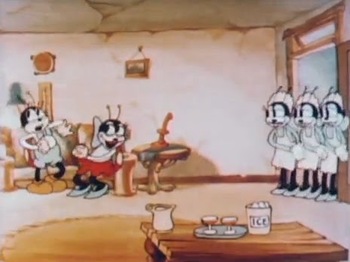 "So why not come on up sometime to Bugtown's buggy clime?"
"Honeymoon Hotel" is a 1934 Merrie Melodies short directed by Earl Duvall. Along with Beauty and the Beast (1934), it is one of the first Warner Bros. cartoons in color and one of only two Warner Bros. cartoons from the 1930s made in Cinecolor (with every other color cartoon being made in Technicolor until 1947-1949).
Advertisement:

The cartoon takes place in the (literally) small town of Bugtown. A young ladybug couple has just gotten married, and have a stay at the honeymoon hotel, although a fire breaks out midway through the night.

We are here to trope what we have to trope: