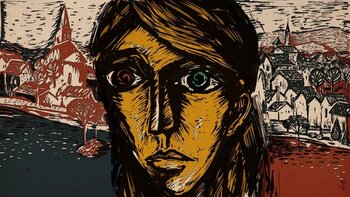 Blind Vaysha is a 2016 animated short film (eight minutes) directed by Theodore Ushev. It was produced by the National Film Board of Canada.

It is an adaptation of a short story with the same title, by Bulgarian writer Georgi Gospodinov. In a vague setting that seems to be sometime before the Industrial Age, and somewhere in Eastern Europe, a girl named Vaysha is born. Vaysha is cursed with very strange magical eyes: her left eye sees only the future, and her right eye sees only the past. She is left in a netherworld where she is unable to see or interact with anything in her present. Can she be cured?

The animation was done in a computer-stylized version of linocut drawings.