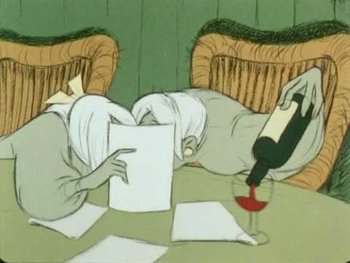 Anna & Bella is an Academy Award-winning 1984 animated short film from The Netherlands, directed by Børge Ring.

Anna and Bella are two elderly sisters. Over some red wine they sit at a table and flip through a photo album, laughing merrily as they remember the good times they had growing up together. The mood grows darker, though, when Anna sees a photo of herself as a young woman canoodling with a handsome young man, and remembers how romantic heartbreak and jealousy drove her and Bella apart.