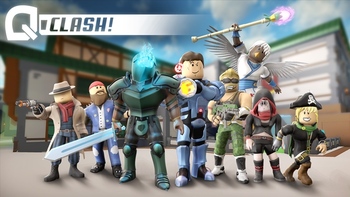 Q-Clash! (formerly Quantum Clash, but changed due to copyright) is a First-Person Shooter Hero Shooter game made on Roblox. It's heavily inspired by Blizzard Entertainment's Overwatch. You play as one of the eight clashers and work together as a team to complete your objective while preventing the enemy from accomplishing the same goal or hindering your progress. Each map has a specific goal you need to accomplish, ranging from capturing the control point to pushing the payload. Whoever finishs their objective first wins.

The game started as a paid access alpha where you need ROBUX to pay. Was originally going to be relased at December 2016 but was pushed to July 1st, 2018. It eventually became free to play in January 8th 2019. The game to this day is still receiving constant updates.