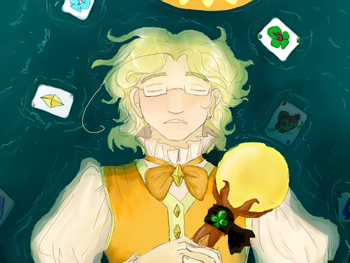 "Two of diamonds? ... It's not like it's an important card or anything."

After being constantly snubbed in a world meeting, Canada leaves to try to find somewhere to reflect on his situation about how he belongs with everyone. Not too long after, he gets burned with a '2 of Diamonds' and falls into a fountain, teleporting him into the Cardverse realm, and accidentally destroying his only way home in the process. Now stuck in that world and mistaken as "Matthew", he has to travel to the four kingdoms that are in peril from an unknown source and try to find a way back him.

. As of at the moment only the prolouge is released as a public demo, but is planned to be released in chapters one by one.