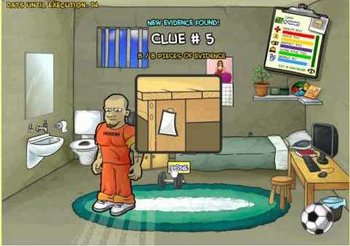 Death Row is a video game created in 2008. It's playable on Kongregate and Fizzy.com. It's a game about Hector Van Daemon, a man who was unfairly framed for terrorism. He's now on death row and will die in 14 days... but if he finds eight pieces of evidence and reforms himself, the governor will free him...
Advertisement:

The gameplay is a simulation. Hector has to earn money to buy furniture, which contains the evidence and keep his stats (Health, Mood, Respect and Work Ethic) high, which reforms him. Then, he'll get the code that will allow him to escape.