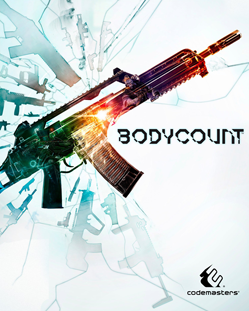 Bodycount is a First-Person Shooter for the Xbox 360 and PlayStation 3, published by Codemasters in 2011. It was developed by the same team that made the Xbox/Playstation 2 shooter Black, and serves as a Spiritual Successor to that title.
Advertisement:

Players take the role of an unnamed operative of "The Network", an extra-governmental para-military group with the mandate of "saving the world" by engaging in military acts that the world's governments are politically incapable of. While on a mission to stabilize a small African nation in the midst of a civil war by assassinating the troublemakers on both sides of the conflict, the operative stumbles upon the existence of a mysterious group known as "The Target", who possess extremely advanced, almost alien technology, and are seemingly engaged in manipulating events in dozens of countries to create war and conflict across the globe.

Like Black, the game focuses on stylized, arcade-like combat, destructible environments (including most pieces of cover), and extravagant "gun-porn" intensity to the firing of weapons. The game's most distinguishing feature is the Skillshot system, where points are earned by killing enemies in special ways (headshots, backshots, killing through cover, explosive kills, etc.) which build up a combo multiplier. Unlike most shooters with a combo multiplier system, the combo isn't time-dependent, and is only broken if you die or kill an enemy using a non-skillshot kill.

The player also has access to 4 special abilities, which are recharged by collecting points (called "intel" in-game) from killed enemies. The special abilities are adrenaline (which makes you immune to damage), incendiary bullets (which do significantly increased damage), radar (which causes enemies to glow blue), and airstrikes (which should be self-explanatory).