Literature / The Book of Lies 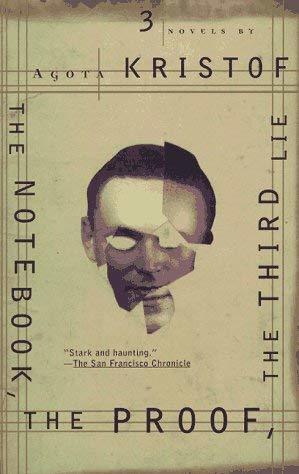 The Book of Lies is a series of books written in French by Hungarian author Ágota Kristóf detailing the lives of twins through the second World War. It focuses on the the depravity during the war, the terrors the two boys witnessed, and functions as a parable for East and West Europe after World War II.

The first book in the series is The Notebook. Not to be confused with the movie, this book introduces the children, Lucas T. and Claus T., and the setting, a border town which is soon to experience the Nazi army. The book is written in plural first person, and it's as though it were written by a small child. This becomes important later.

The second book is The Proof. This book focuses on Lucas living on his own after the events of the first book. He struggles with the fact that he drives away his loved ones and his loneliness without Claus around, and adopts a deformed child named Mathias. This book is written in singular third person.

The third book in the series is The Third Lie. The plot of this book from beginning to end is filled with spoilers about the first two books from beginning to end, but in short it is revealed that the first two books were fabrications of Lucas' life. Still, it can be said that this book completes the parable of West and East Europe after WWII. It is written in first person. It's definitely the most heartrending of the three, and that's saying something.

The series can be obtained here.

The first book was also adapted into an Hungarian film (titled A nagy füzet), directed by János Szász.

As a final warning, BEWARE OF UNMARKED SPOILERS, which are unavoidable given The Third Lie's take on the series.

Not a bad idea, the train.