This page assumes you have played Adventure Forward 2: Points Of Conflict prior to this one. Therefore, there will be unmarked spoilers for that game here. You Have Been Warned. 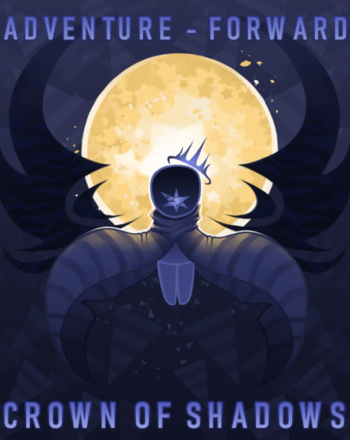 "Crown of Shadows is the long awaited sequel of Adventure Forward 2, featuring new worlds in a style never seen before, created by an ex-developer of the original series. Each world is populated with fun and interesting characters to develop a story following the events of Celesteal's death."
— The demo game's description
Advertisement:

The third game in the Roblox original Adventure Forward series and a direct sequel to Adventure Forward 2: Points Of Conflict, Adventure Forward: Crown of Shadows was developed by SirRovers, who took up the role of the game's creator after the original creator, Explode1's, termination from ROBLOX. The demo (Which was only able to be temporarily played until February 1st) was released on Christmas Eve (December 24) 2020.

More than a year has passed since the second Star Savior had defeated Celesteal, freeing the Points from their fates under their control and giving them the chance to live their own lives. Peace has been prevalent in the Sky Sanctuary... Until Anshine and Stratosfear encounter an odd door behind which a being had managed to sneak into the Sky Emporium. When the Star Savior arrives to help, the door blasts open. Voixer is revealed to have survived erasing himself from the previous game's true ending due to Celesteal's death, and intends to finish what he started, destroying the Sky Emporium in the process, and leaving the second Star Savior, Anshine, and the other Points to fall into the various pocket dimension worlds that Celesteal had created in the past.

On October 14, 2021, it was announced that the game was going to be rebranded

to a new series called "Stars Align", thus detaching the game from the Adventure Forward series. The debut trailer can be viewed here

Please note that the following tropes are based on the original Adventure Forward: Crown of Shadows demo, and the page is heavily subject to change for Stars Align's release.

And thank you, the player.
Happy Holidays, Star Savior.