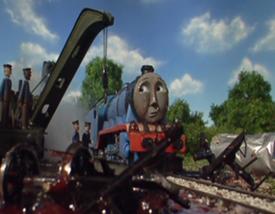 Gordon is suffering from a spot of bother; his firebox is rattling whenever he cools down at night, which has resulted in teasing from Thomas and Percy. Gordon tells them that tank engines have very bad manners, though he feels quite embarrassed about his problem.

The next morning, Gordon finds Percy still teasing him. When he arrives at Knapford, the teasing continues, this time by Emily and Diesel. Gordon has had enough; he decides to make demands in order to stop the teasing. So he pulls up ahead of James at the water column, tells Percy not to hang around at platform one as it is his platform, and finally he tells Thomas, James, and Emily to give a polite "toot toot" of their whistles the next time they see him - all because he is the fastest and best.

However, when Gordon sees Emily passing him, he does not get the polite "toot toot" that he expects - only to miss a red signal and crash into a train of jam tankers ahead of him. Whilst waiting to be rescued, Gordon gets teased again by Percy, Thomas, and James. Soon Edward arrives with the breakdown train and he takes Gordon to the Works to be mended.

Meanwhile, Emily and Henry take turns in pulling the express and they quickly realize that Gordon must be quite strong to do it regularly. Even Percy misses Gordon as the rattle helps him to get to sleep. A few days later, Gordon is mended with all the jam cleaned out of his boiler and his firebox no longer rattling. That night, Gordon apologizes to his friends for his rattling firebox and for his "toot toot" demands because he did not deserve it. However, Thomas and the other engines now know that Gordon deserves a polite "toot toot" as he works very hard indeed as the express engine.

And, since that day, all of the Fat Controller's engines greet their friends with a polite toot of their whistles for being really useful.

Tropes featured in the episode (YMMV):