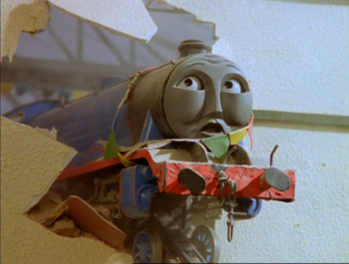 One morning, Gordon is complaining, which makes James cross. James asks why Gordon complains all the time, and Gordon tells him that he's a big engine, and that he shall complain whenever he wants, and he then tells James that he's just a small engine with ideas above his station, and that one day he'll show them just what a big engine can really do.

Later, Gordon is ordered by The Fat Controller to pull an empty express train to Kirkronan to test the new station building. Along the way, he begins to feel sick. His driver tells him that he may have to go to the works when his pipes are clogged. Gordon soon arrives at the station. He's impressed, but his mood soon changes when in front of him is a blank wall and a set of buffers. Gordon is bored by the blank plaster wall in front of his buffers, and says that important engines should have a panoramic view so that people could see him.

On the return journey, Gordon tries to build up speed, but he then breaks down and comes to a complete stop in a siding. Gordon's driver tells him that something inside of him is broken, and that he'll really have to go to the works. When James arrives to collect his coaches, he tells Gordon that he was too puffed up in his smokebox and it serves him right.

Gordon is repaired in time for the opening of the new station, but when he approaches Kirk Ronan, neither the driver and fireman can apply his brakes. Something had jammed and Gordon loses control and crashes through the wall. The Fat Controller tells him that he knew he wanted a panoramic view, but it was not the way to achieve it.

Upon his return from the Works, Gordon arrives back at the station for it's second official opening, and this time he arrives safely. Gordon is delighted to discover the broken wall has been turned into a panoramic window. The Fat Controller tells him that it's here to stay, and he trusts that he'll always see through it from the safety of his own rails.