Adapted from: Gordon the Big Engine, "Off the Rails" 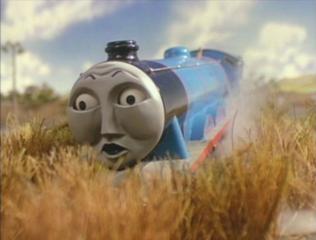 One morning, Gordon is resting his eyes at the station while bragging to himself just how important he is. Henry suddenly pulls up and wakes Gordon rudely. Gordon is very cross, believing that an engine who has never had an accident should be respected. Percy arrives and innocently asks if jammed whistles and burst safety valves count as accidents. Gordon denies it and tells Percy that those sorts of high spirits could happen to any engine, not like Henry who came off the rails.

When Henry is about to take the express, Gordon reminds him "not to come off the rails today", making Henry angry. When he leaves, Gordon tries to go back to sleep, but then his driver wakes him telling him that they have been asked to pull a special goods train. Gordon, who is already in a bad mood, refuses to take trucks, as he would rather take coaches.

Gordon's fire is unable to burn fast enough, so Edward comes to push him to the turntable to be turned around. Gordon complains the whole way and Edward rebukes him as they reach the turntable. By now, the movement has gotten Gordon's fire burning nicely and making steam.

As the turntables turns, Gordon is angry that he is willing to do anything that stops him from taking the special regardless of the consequences. When the table moves halfway round, he moves forward in an attempt to jam it like last time. However Gordon is unable to stop and slides down the unused rails into a ditch. Gordon shouts for someone to get him out, however his crew refuses and angrily tells him that he is stuck.

In his office, the Fat Controller is called and told everything that has happened. Seeing Gordon from his window, he arranges to have Edward take the special train and leave Gordon where he is for now. Meanwhile, some little boys come by and start to tease Gordon with a rhyme, leaving him humiliated.

Gordon stays in the ditch for hours and no rescue team comes until late at night. After extensive work preparing sleepers to keep him out of the mud, he is pulled out from the ditch by James and Henry.

Afterwards, a filthy and disgraced Gordon crawls back to the shed, sad and all the wiser for his experience.