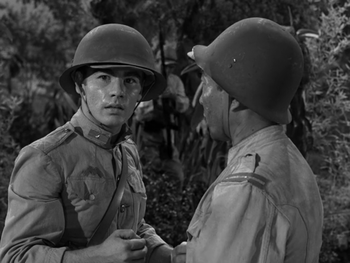 Oh boy...
Rod Serling: It's August 1945, the last grimy pages of a dirty, torn book of war. The place is the Philippine Islands. The men are what's left of a platoon of American Infantry, whose dulled and tired eyes set deep in dulled and tired faces can now look toward a miracle, that moment when the nightmare appears to be coming to an end. But they've got one more battle to fight, and in a moment we'll observe that battle. August 1945, Philippine Islands. But in reality it's high noon in the Twilight Zone.

August 6, 1945. During the final days of World War II, a group of American marines on Corregidor are monitoring a cave in which Japanese soldiers are taking refuge. While spotting for a mortar company, their new commanding officer, Lieutenant Katell (Dean Stockwell), joins them. Almost immediately he wants to assault the cave and flush the soldiers out, even though the could easily be contained and bypassed. After a conversation with his sergeant Causarano, Katell reaches a compromise; bombardment will continue until dusk, and then the assault will begin. That evening tensions flare as the reluctant veterans point out that the Lieutenant does not care about anything other than killing Japanese in an effort to validate himself. After an argument with Sgt. Causarano, during which Katell states that all Japanese soldiers are to be killed, end of the war or not, he accidentally knocks over his binoculars, which he had been using to monitor the cave.

The scene changes to day, and a Japanese soldier picks up the binoculars, handing them to his commander who dropped them. We then see the commander, who (obviously) is Katell. Not realizing his change, he runs for shelter in the cave. However, upon nearing the cave he is shot at by an American soldier in an outdated uniform. He retreats to his Japanese squad, and upon questioning learns he is on Corregidor on May 4, 1942. His squad, who believe him to be Lt. Yamuri, is unnerved by his confusion and ramblings, which brings him under suspicion from a captain. Katell wises up and plays along, and he learns that the Japanese plan to attack the cave in a frontal assault, even though most of the Americans inside are not fit for combat. Upon stating that they should bypass the cave or just take the Americans prisoner, he is slapped by the captain for cowardice. When he continues to ask why they must attack the cave, the Japanese captain states that the enemy must be killed, giving a speech similar to Katell's rant earlier. The Japanese squad moves out, leaving Katell behind.

The scene shifts back to the American marines on August 6, 1945, with the lieutenant back to normal. Causarano picks up the broken binoculars, and over the radio command orders them to fall back, as the atomic bomb has just been dropped and they assume this will end the war. The marines celebrate, with Causarano telling Katell that there will be other wars for him to fight. The humbled Katell silently replies that he hopes that there aren't.

A Quality of Tropes:

Rod Serling: "The quality of mercy is not strained, it droppeth as the gentle rain from heaven upon the place beneath. It blesseth him that gives and him that takes." Shakespeare, The Merchant of Venice, but applicable to any moment in time, to any group of soldiery, to any nation on the face of the Earth or, as in this case, to the Twilight Zone.