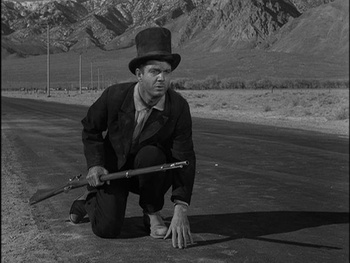 This isn't The Oregon Trail anymore.
Rod Serling: "The year is 1847, the place is the territory of New Mexico, the people are a tiny handful of men and women with a dream. Eleven months ago, they started out from Ohio and headed west. Someone told them about a place called California, about a warm sun and a blue sky, about rich land and fresh air, and at this moment, almost a year later, they've seen nothing but cold, heat, exhaustion, hunger, and sickness. This man's name is Christian Horn. He has a dying eight-year-old son and a heartsick wife, and he's the only one remaining who has even a fragment of the dream left. Mr. Chris Horn, who's going over the top of a rim to look for water and sustenance and in a moment will move into the Twilight Zone."
Advertisement:

It is 1847, and Christian Horn (Cliff Robertson) is the leader of a wagon train expedition from Ohio to seek a new life in California. The journey so far has been long, arduous, and perilous. Supplies are running low, morale is sagging, and to make matters worse, Christian's son has come down with a mysterious illness and has been battling a fever over the past week.

In search of water. Horn decides to explore a nearby hill a hundred yards away, but when he gets to the top of the rim, he spots a strange black road, traveled by giant wheeled monsters.

Where is Horn exactly, and how can he survive in this strange new world?

A Hundred Tropes Over The Rim:

Rod Serling: "Mr. Christian Horn, one of the hearty breed of men who headed west during a time when there were no concrete highways or the solace of civilization. Mr. Christian Horn, and family and party, heading west, after a brief detour to The Twilight Zone."