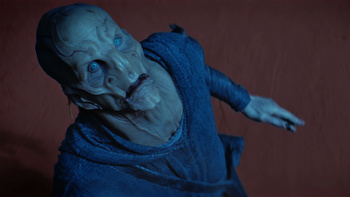 Saru looking up at the night sky.

We learn the story of how Saru first came into contact with Starfleet. The son of a village priest, Saru is uneasy with the arrangement his people have with the Ba'ul, namely that in return for the Ba'ul not hunting the Kelpiens, regular offerings of Kelpiens are made as sacrifice. Saru wonders if there might be someone out there other than the Ba'ul, and when a piece of advanced technology falls from a visiting Ba'ul ship, he tries to reach anyone he can by building a transmitter.