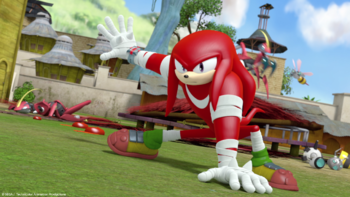 Knuckles, this is no time for your Iron Man impression.

Previously, Team Sonic was ambushed by the Cubot prototypes they thought they were friends with. Tails discovered malware had infected their systems; meanwhile, Eggman's robots fell victim to the same signal that infected the prototypes and attacked Hedgehog Village, throwing everyone into a robot uprising. The team was forced to divide and conquer; Sonic and Tails headed to Morristown to take the signal offline while Knuckles, Amy, and Sticks remained on the ground to defend the Village from the attacking robots. But things got worse for both sub-teams— FriendBot was turned back into FiendBot by the malware and arrived to make defending the Village significantly harder, while Sonic and Tails got themselves into a tense dogfight with Morristown sentries and managed to get into the sky city only to find it in bad shape. The adventure resumes with the latter two discussing how depressing the place looks in its current state (more so than Comedy Chimp's holiday special the year his ex-wife left), then turning their focus to finding out why Morristown is in ruins and what— or who— is responsible. Sonic decides they should go for a stealthy approach... and that plan goes up in smoke immediately when he trips an invisible laser with his first careful step and sets off an alarm. Several robot guards equipped with weapons intercept them, and Tails scans them and deduces they're Morristown citizens infected with the malware signal; as such, he advises they shouldn't destroy every robot around them for a change.

With no other options, the two run as the guards give chase, blasting at them all the while. However, running fails them when they come to a dead end. Fortunately, there is an escape— a trapdoor that stretchy arms extend from, the owner of those arms telling them to get in fast. Against common sense, they let the arms grab them, and they slide down a chute and into a small room, where they're ambushed by yet more robots. However, another voice tells them to stand down, as the two are allies. The voices turn out to be Mighton and Bolts, the two robot protectors that Team Sonic rescued from Eggman's clutches earlier. Sonic tries to extend a friendly greeting, but Mighton has no patience for that at the moment; Bolts explains he was made leader of the robot resistance, and he's been on edge since. The two further explain that a surface bot sent out a signal for miles in every direction, which is the reason why all robots went berserk. They'd take care of things themselves, but were they to leave the lead-lined bunker everyone's standing in, they'd no longer be safe from the waves, and the bot in question would be in complete control of them. As beings of organic nature, Sonic and Tails are immune to the signal, so they offer to take care of the problem in their stead. They're given a map and a destination to follow it to: the Central Power Core of Morristown, where the surface bot is currently located.

Meanwhile, in Hedgehog Village, the villagers continue to run and hide from the infected robot siege. Knuckles, Amy, and Sticks are fighting as hard as they can to put an end to the mayhem, and Og, the former Froglodyte who's now a Team Sonic ally, shows up to help them out, always willing to put his pacifism aside for the right cause. Amy and Sticks in particular are kept busy by FriendBot, a name Sticks has a hard time connecting to the robot currently attacking them; Amy tries to assure her that he has a great personality, but the badger has a hard time taking her word for it. Back in the sky, Sonic and Tails are themselves having a hard time as they follow the map of Morristown because, as Sonic puts it, "everywhere in Morristown looks like everywhere else in Morristown", and on top of that, they're dealing with treacherous panhandles. Out of nowhere, an alarm sounds and robot guards appear to capture them; when the duo learns they're being taken to the Central Power Core, they go without a fight, exploiting the occasion to get to their destination without any further trouble.

The robot guards take Sonic and Tails to the Central Power Core, where their leader sits in a chair high above; the guards inform the leader about their new captives. In response, the chair swivels, revealing the leader to be Hypno-bot, an old creation of Tails'! He welcomes Sonic and Tails and says it's nice to see them again. Tails is confused at Hypno-bot's newfound ability to speak, because when he created the robot to participate in the Robot Battle Royale robot-fighting tournament, he never programmed him with sentience. Hypno-bot confirms this wasn't Tails' doing and goes on to explain how he got here, starting with the day he was created; he recalls participating in the tournament, then later being defeated by a back-flipping poodle robot, the explosion of which flung him into space. He floated there for weeks, believing Tails would come to save him, but the only thing that did was a passing Morristown sentry; he was brought to Morristown, where he was repaired, improved upon, and granted sentience... allowing him to realize his creator had abandoned him. Feeling betrayed, he used his ability to hypnotize any robot to bring the population of Morristown under his control (and yes, even he thinks of a better name for the city) so it would serve as his stronghold, and then do the same with the rest of the world's robots so they would destroy every last organic lifeform— his form of retribution for being left behind.

Tails, overcome with guilt, tells Hypno-bot that he never realized he needed his help and honestly apologizes. Too bad Hypno-bot refuses that apology by sarcastically stating that he should just give up his world domination plans, then ordering his minions to laugh condescendingly (and immediately retracting that order when Sonic makes a pun at his expense and his minions laugh at that). Tails says that no one else needs to suffer the consequences because it's him and only him Hypno-bot has a problem with, and Sonic adds that it's not cool for him to hypnotize the very robots who repaired him and took him in. Hypno-bot responds that he'll never be cool... because Tails built him in his own image. Harsh. With the pleasantries now exhausted, Hypno-bot commands his legions to attack, and their numbers prove too much for Sonic and Tails alone.

Returning to Hedgehog Village, the B-team faces a similar situation, with the robot rampage becoming too hard for them to repel by themselves. As the villagers continue to hide, Knuckles decides it's time to rally them to fight back, so he launches a big speech about the things they care about most: their personal belongings. Sure enough, it works, and every single villager, regardless of alignment or background character status, joins the battle to take back their home. With some backup behind them, Knuckles, Amy, and Sticks have more of a fighting chance. Unfortunately, back in Morristown, Sonic and Tails have no such luxury. Tails notices Hypno-bot running off and gives chase as Sonic continues to struggle with the guards, though he too breaks free and joins Tails outside, only for them to be surrounded by more guards. Frustrated, Sonic decides the only way to deal with the guards is to take Hypno-bot down, so he shoves his way through the guards and causes one to drop his weapon. Tails picks it up and takes to the sky with his namesakes, aiming at Hypno-bot... but hesitating to pull the trigger. Sonic asks him what gives, and Tails answers that Hypno-bot is his creation; he can't bring himself to take him down for good.

Obviously, Tails' love for his creations allows for a consequential turn of events; Hypno-bot fires a bola gun that causes Tails to fumble and drop the weapon, but not before accidentally firing a shot that blows a hole in Morristown's glass dome. Sonic gets the back of his left leg brutally kicked by one of the guards, injuring it and causing him to crumple to the ground in pain. Noticing this, Tails attempts to move closer to Hypno-bot, but another bola from his creation's gun ties up his tails, and the momentum sends him flying out of the hole he created; he barely manages to grab the edge of the floating city as Hypno-bot laughs at his misfortune. Refusing to let his best friend suffer a terrible fate, Sonic runs toward them, pushing through the inevitable pain and kicking Hypno-bot off the edge of Morristown, then grabbing Tails' hand just as he loses his grip; unfortunately, the pain gets worse when one of the guards crushes his injured leg by stomping on it.

All the while, Hypno-bot continues to fall until he finally crashes into an ice-covered lake. The hold he has on every robot he's hypnotized is broken, causing the robots in the Village Center to retreat and giving Team Sonic's B-team and the villagers reason to celebrate. Amy applauds everyone for their efforts in ending the attack, but as soon as she asks who wants to clean up the mess, the villagers mumble to themselves and walk off, much to her dismay. Inspiration only goes so far. Back at Morristown's lip, as Sonic continues to struggle pulling Tails back up, the leg stomping relents, as do Hypno-bot's former guards; seeing as it's safe for them to surface, Mighton and Bolts show up nearby, and Bolts gives Tails a hand with his extending arms (sorry). Meanwhile, in Eggman's lair, the evil scientist is eating cold cereal, glum after losing his entire stable of robots. His day improves again, however, when his radar shows all of his robots returning to the lair... but another blip shows up on the radar not long after, and judging by Eggman's surprised reaction, it's not one of his.

Elsewhere, Sonic, Tails, Mighton, and Bolts have all returned to Morristown's lead-lined bunker, where Sonic's getting his injured leg cast sloppily with duct tape; after all, the city has no methods for treating organic injuries... that, and Bolts says duct tape fixes everything. As Sonic continues to wince, Mighton tells him he's gone through worse— namely, a situation in Guatamañana where he awoke to find his platoon decapitated (though since they were robots, he just screwed the heads on again). Guilt continues to eat away at Tails, who says he feels horrible about everything that's transpired. Upon Sonic's attempt to convince him that it wasn't his fault, he argues that he created a robot that hypnotizes other robots and unknowingly abandoned him, then hesitated to destroy that robot and got Sonic's leg messed up as a result. Sonic has to agree with his point, but he reassures his best friend that despite those mistakes, everything ultimately turned out fine.

However, the Blue Blur is unaware of the truth: this adventure has one last ace up its sleeve. From inside a watertight Eggmobile, Eggman's gone underneath the icy lake Hypno-bot fell into to investigate the odd signal he got. And surprise, surprise— it's Hypno-bot himself, now frozen in a block of ice. He grabs the robot with the Eggmobile's claw, then welcomes him to Team Eggman, going into another fit of sinister laughter as the episode ends (and for the third time running, Knuckles is annoyed by the cliffhanger). Looks like we're heading into overtime, folks. The final battle for Morristown is fast approaching. Will Team Sonic triumph?