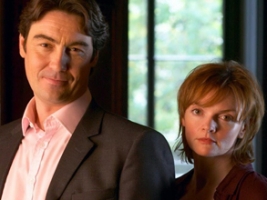 Oh look, he's almost smiling in this one. Now that Helen's entered his life, that smile will be seen less and less frequently.
Havers:[talking to Lynley about Sir Stuart] Stuart Stinhurst isn't some inbred wastrel. He earned his knighthood from the government on behalf of a grateful nation. [Lynley looks at Havers, disconcerted.]

Joy, the script writer of a popular TV series, is found murdered in the mansion of the producer Sir Stuart Stinhurst. When Lynley and Havers arrive to investigate, Lynley is surprised to find that his long-time friend, Helen Clyde, was among those staying at Sir Stuart's mansion at the time of the murder. Even more disturbing to Lynley is the fact that Helen is in love with the prime suspect, Director Rhys Davies Jones. Against his and Havers' better judgment, Lynley decides to take on the case. Is he letting his prejudice against his friend's lover stand in the way of looking for the real killer?