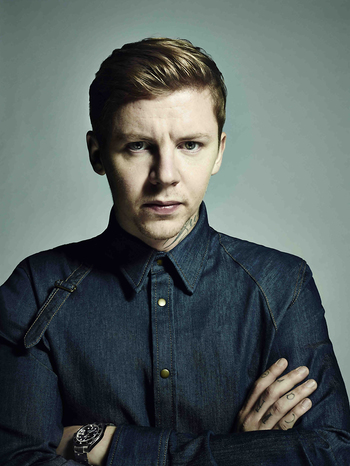 This ain't so stereotypical man,
Not for a stereotypical man,
It should be me that wants to get rid of you instead it's you that don't give a damn (what?),
It was meant to be a one night 'ting,
Nothing more than a little one night fling,
Now when I'm in need you're the one I ring I (I need you tonight).
"I Need You Tonight"
Advertisement:

Stephen Manderson (born 1983), aka. Professor Green, is a British rapper. He's released three full length albums with a fourth on the way as well as an EP and mixtape and has had a UK number-one hit with his song "Read All About It" (featuring Emeli Sande).

He was married to Quality Street heiress Millie Mackintosh, well-known for her appearances on Made In Chelsea (a British Jersey Shore with posh people) for three years.