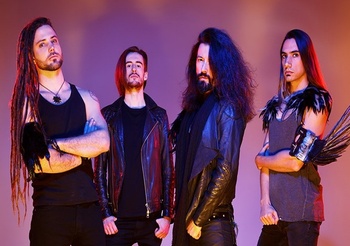 Neonfly are a melodic power metal band based in London, England. Founded in 2007 by guitarist Frederick Thunder, the band currently consists of vocalist Willy Norton, guitarists Thunder and Andy Midgley, drummer Boris Le Gal and bassist Paul Miller. The name has no clear origin, as Thunder tends to answer questions about it either obliquely or sarcastically. To date, they've released one EP (Clever Disguise in 2008), two albums (Outshine the Sun in 2011 and Strangers in Paradise in 2014) and four videos (A Gift to Remember, Better Angels, Highways to Nowhere and Heart of the Sun, the last of which was a lyric video).