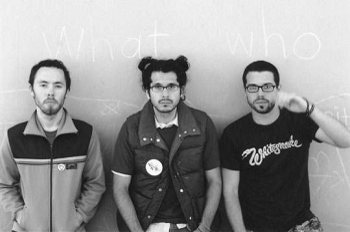 You are never going to sleep again.
Advertisement:

To put it in very simple terms, cLOUDDEAD are a bunch of weirdos, making music for weirdos. But that's not necessarily a bad thing, influences as far-flung as 60's psychadelia, indie rock, and ambient electronica can be heard in their music, making the whole ordeal sound like a trippy mish-mash of styles. Upon the release of their debut album -cLOUDDEAD- (which was itself a compilation album of six separate two-track EPs) was alternately hailed as a work of genius and "smartass surrealism"; the truth is probably somewhere in the middle. The group released one more album -Ten- and a split EP with Boards of Canada before disbanding, though the members reunited for the Themselves song "Rapping4Money" in 2009.

They are considered the Ur-Example of Cloud Rap.

Tropes that apply to cLOUDDEAD and its members