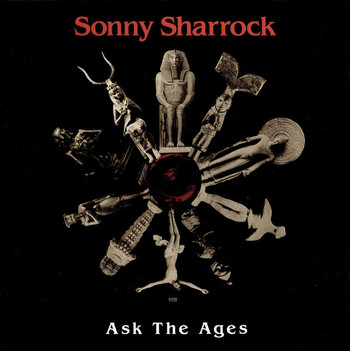 .....of the way we used to sing
Advertisement:

Ask the Ages is an album by African-American jazz guitarist Sonny Sharrock released in 1991 on Axiom Records.

Produced by Bill Laswell, it would see Sharrock playing with former John Coltrane affiliates, drummer Elvin Jones and saxophonist Pharoah Sanders, the latter of which he had previously played with on the saxophonists seminal spiritual jazz records Tauhid and Izipho Zam (My Gifts). It would also include a young bassist in Charnett Moffet, who himself was the son of Charles Moffet, another drummer for Ornette Coleman.

Noted for its musicality and idiosyncratic take on jazz guitar, Ask the Ages would be a fusion of his more lyrical post-bop jazz guitar style and his noisier, feedback utilizing, ferocious guitar shredding, while drawing heavily on his own influences such Miles Davis' modal jazz and John Coltrane's notions of freedom. It would be seen as one (if not, the) greatest of his own works as a bandleader and guitarist and of free jazz as a whole. Unfortunately, it would be the last record he would see released in his lifetime, as he would die of a heart attack in 1994.

Who Does She Hope to Trope?