Manga / Magus Of The Library 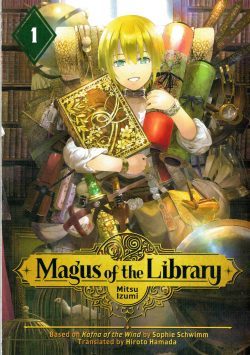 Ages ago, the Altatonan continent was nearly conquered by a dangerous tyrant, The Emissary of Wormwood. In his quest for domination, he nearly carried out a genocide against the Haupi people. This tyrant was only defeated thanks to the efforts of a powerful Magus, who united the various clans of the continent into one force to fight against him. This Magus sincerely believed that to protect books was to protect the world. Thus, in order to preserve peace and knowledge and to help prevent another such tyrant from arising, he founded the Great Library. Centuries later, they continue to follow their central goal: Protecting books and ensuring that the people have access to them.

The story follows Theo, a poor boy from a small village who is a half Haupi and is often ridiculed by his racist peers. His life changes forever when he encounters a Kafna named Seodona. A Kafna is a scholar of the Great Library who makes sure that books are kept safe, catalogued properly, and that everyone's freedom of information is maintained. Seodona was dispatched to his town in search of a rare book, and she entrusts one such book to Theo and encourages him to pursue his dreams. This convinces Theo to become a Kafna and ultimately puts him on the path to change the world.