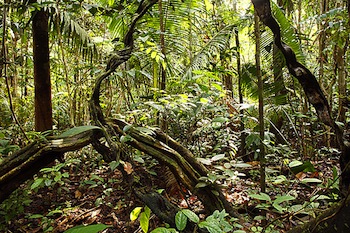 A huge rainforest, with big trees, plants all around, a bunch of insects and, of course, a river (whose inhabitants include piranhas and electric eels). That's the basic concept.

But, don't expect much more researching than this from the writers. The Amazon — be it the Amazon, an African jungle, Vietnam or any other else — is always basically the same. If you're lucky, the writers won't put a lion in the middle of Peru's eastern side. Some really well-worked settings will even include a native language. Again, if you're really lucky, it will be a real native language.

Featured in any other media than the movies, it is the most popular setting for a Green Aesop about preserving the rainforests. Another common feature is that it is either depicted as if it were contained entirely within Brazil, or extending to places where it does not actually stretch to; like Lima and the northernmost parts of Colombia (Atlántico, and sometimes even into central America, to the point that it seems writers think the Amazon is just a synonym for "South American rainforest", and not a particular region thereof.

Not to be confused with the women warriors of Greek myth, the Amazonian Beauty, or even a brigade (or entire society) of them. Or the website, for that matter.