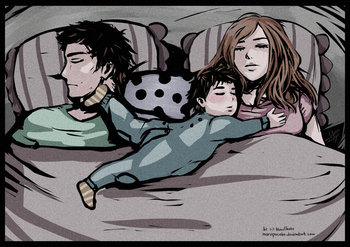 Used with permission.
"A son exists to glorify the life of his father—as meaningless and worthless as that life might be. But if a boy is to become a man, he must glorify himself… and make a name even greater than his father's."
— Cesare, Borgia, "The Serpent Rises"
Advertisement:

The Oedipal archetype deals with any conflict between father and son, particularly where the son must supplant the patriarch or must extricate himself from his father's shadow and find his own place in the world. Much of the time this presents as the son's aim of removing his father to further himself in the eyes of his mother — not necessarily, but maybe, into her bed. This archetype shares some themes with both the Messianic Archetype (rebirth and renewal) and The Trickster (out with the old, in with the new).

The supplanting part is key here. Without it, you've just got Calling the Old Man Out — when someone calls his dad out for his transgressions but doesn't supplant him. If the supplanting takes the form of murder, it's Patricide and Murder in the Family. If there's an explicitly sexual relationship, see Parental Incest. If there's a partner who's like their parent, see Like Parent, Like Spouse. And if there's incestuous subtext without wanting to supplant anyone, then it's just Incest Subtext. See also Archnemesis Dad, which makes the father figures into outright villains while leaving out the Freudian implications. Compare Jealous Parent. Also compare "Well Done, Son" Guy — who actually wants his father's approval.

Oedipus the King — the Greek Tragedy dramatized in 429 BC by Sophocles — is the Trope Namer. The Trope Codifier, however, is Sigmund Freud, as Oedipus himself is not an example of the trope. Oedipus never knew who his mother and father were until it was too late. King Oedipus was not someone who secretly wanted to kill his father and sleep with his mother — he was a man who desperately didn't want either to happen, but ended up doing so anyway because You Can't Fight Fate.

On the other side is the Electra Complex, where the conflict is between mother and daughter, which is just as common, if a bit different in its execution. It is also named after one of Sophocles' tragedies, Electra, where the trope is Played Straight as Electra was quite vengeful after her father Agamemnon was murdered by her mother Clytemnestra, and she ruthlessly plots to commit Matricide. Also see "Laius Complex" and "Jocasta Complex" for the parents' perspectives.