Literature / The Testament Of Tall Eagle 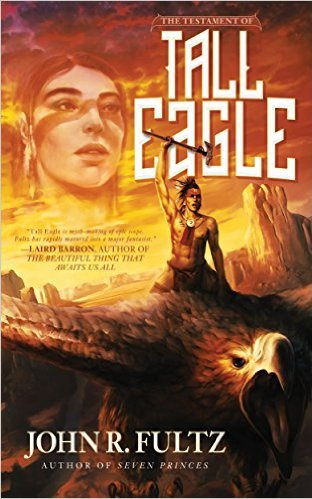 He'll do anything to save his people.
Advertisement:

The Testament Of Tall Eagle is a book by John R. Fultz and published by Ragnarok Publications.

A young warrior's vision-quest unveils an alien city full of magic and mystery. As a tribal rift threatens to destroy Tall Eagle's people, night-crawling devils stalk and devour them, so he seeks the wisdom of the high-flying Myktu. These fantastic beings offer him hope, a chance for rebirth and prosperity, as two separate realities converge. Yet first Tall Eagle must find White Fawn—the girl he was born to love—and steal her back from the camp of his savage enemies. His best friend has become his deadliest rival, and now he must outwit an invading army of conquerors to lead his people into the Land Beyond the Sun.

THE TESTAMENT OF TALL EAGLE is the epic saga of The People, as told in the words of their greatest hero.