Literature / Black Clover: The Book of the Black Bulls 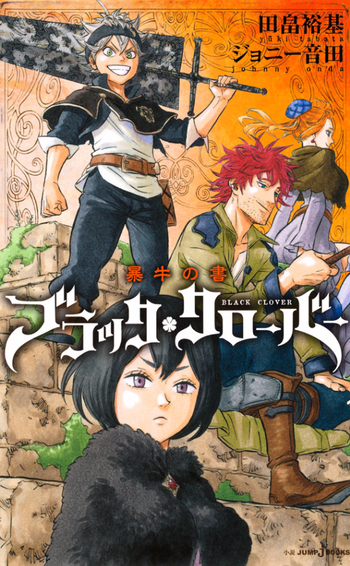 The Book of the Black Bulls is the first Black Clover light novel written by series creator Yuki Tabata and illustrated by Johnny Onda. It was released in Japan on August 4, 2016. Set from the perspective of the Black Bulls, the novel tells the story of how they first met the runaway Diamond Kingdom commander Fanzell Kruger.

The first half takes place shortly after the main storyline begins, in which Asta befriends Fanzell and becomes his student. They briefly encounter Mariella, a former student who's now working for the kingdom as an assassin and is plotting to take back Fanzell to help them finish experimenting on Mars. Eventually, Asta tells Fanzell he must find a new reason to live before going their separate ways.

Five months later, after Asta is injured during his battle with Mars, Fanzell asks the Black Bulls to help search for Dominante while dealing with the Diamond Kingdom's assassination squad.

The novel was included in the anime adaptation as a two-part episode, which takes place during the Forest of Witches arc.

The Book of the Black Bulls provides examples of:

Alternative Title(s): Black Clover The Book Of The Black Bulls