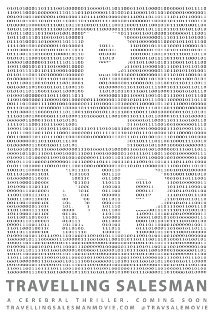 Traveling Salesman is a 2012 film about a group of mathematicians attending the final meeting of their project for the United States Department of Defense.
Advertisement:

The group has solved the famous P versus NP problem

and are giving that information to the government. At the last minute, they debate the political and moral ramifications of a program that makes all information accessible but with the program's existence being kept private.

Not to be confused with the trope involving roaming sales associates.