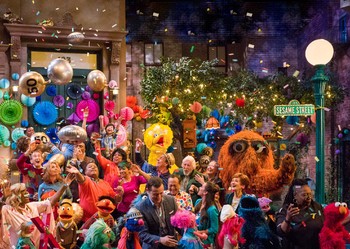 Sesame Street's 50th Anniversary Celebration is Exactly What It Says on the Tin: a 2019 special celebrating the 50th anniversary special of Sesame Street.

The star-studded musical special stars Joseph Gordon-Levitt as he visits the street to help celebrate the show's 50th anniversary. He intends to get a group photo under the famous street sign, but the Muppets (namely Elmo, Abby, Rosita, and Super Grover) must keep him distracted when they discover it has gone missing.