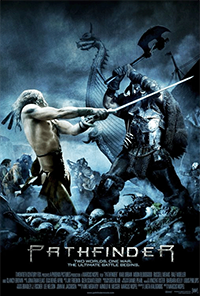 Pathfinder is a 2007 film directed by Marcus Nispel.

Around 1000 AD, a Viking tribe lands in what is not yet called North America, looking to establish a colony and wipe out the local "skraelings". Instead, they are themselves wiped out by a band of native warriors, all except one child, a little boy called "Ghost" by the tribesmen for his paleness.

Cut forward 15 years, and Ghost (Karl Urban) is an outsider in the tribe. A new band of Vikings, led by Gunnar (Clancy Brown) and Ulfar (Ralf Moeller), arrives and wipes out most of Ghost's tribe. Ghost escapes, suffering an arrow wound in the shoulder as he flees. He winds up with the Pathfinder (Russell Means), shaman of a neighboring tribe, and the Pathfinder's beautiful daughter Starfire (Moon Bloodgood). Eventually Ghost leaves to take revenge on the Vikings, Starfire coming with him.

Remake of a 1987 Norwegian film, Pathfinder. Neither film is related to the novel of the same name by Orson Scott Card, or the series of role-playing game manuals and related fiction.