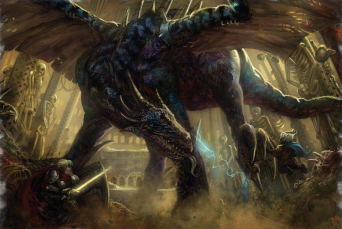 Seventh Chronicle of Saint Ferais, Dragon Slayer Born of tainted womb and dragon lust, the Beast did crawl forth, shrieking and spitting lightning and eating of its week-dead parent's flesh. Blood-born and twisted, terrible and enraged, even the promised centuries of cruelties and slaughter would never quell the shattered paragon's bloodlust. And the Lord of Agonies smiled. Here was his will made flesh. And so he gifted the Beast with two natures, to spread terror and pain, shadow and suffering in mortal guise, mortal cunning in dragon form, this despoiler, this abomination, this Beast called Kazavon.
Advertisement:

Pathfinder is much Darker and Edgier than most Dungeons and Dragons-based worlds, and it SHOWS.

Rise of the Runelords

Paizo’s first Adventure Path set the (dark and edgy) tone for all Pathfinder stories to follow.