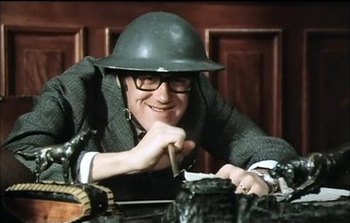 Leif is a Swedish comedy movie from 1987 made by the comedy group Galenskaparna & After Shave.

The story is about a small village, Rotum, living in harmony despite (or rather, they just don't care actually) the fact that the village's finances are made by a huge company, Rotums Kanoner & Krut, who's making a profit in creating and exporting weapons. Totally illegal, but profitable. At the same time as the company starts losing money from their export (and starts experimenting with legal ways to sell stuff related to their factory), someone called Leif writes a letter to the newspaper, exposing the whole company.

Chaos!! Who is this Leif? He must be stopped, and he must be silenced in some way, quickly. Otherwise, Rotum is doomed!

Tropes related to this movie: