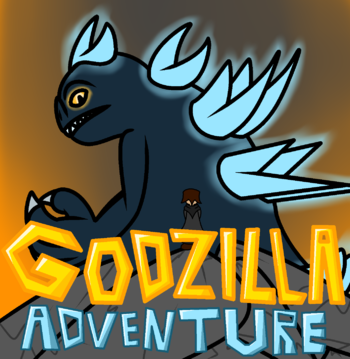 “We knew the world would not be the same. A few people laughed, a few people cried. Most people were silent. I remembered the line from the Hindu scripture, the Bhagavad-Gita; Vishnu is trying to persuade the Prince that he should do his duty, and to impress him, takes on his multi-armed form and says, 'Now I am become Death, the destroyer of worlds.' I suppose we all thought that, one way or another.”
—J. Robert Oppenheimer

is an as-of-this-writing-WIP Adaptation Distillation of Godzilla characters and storylines into, in the artist/author's own words, "a stab at feeling like a modern teen's cartoon". It features unique designs for each Kaiju; some more drastic redesigns than others, and aims to provide a steadily evolving overarching plot through the bios provided in each entry. The author has stated that he is angling for a feeling akin to a modern cartoon aimed at a teenage audience.

It also has a Tumblr blog by the creator here

, created in celebration of Kaijune. It was updated daily with the preexisting kaiju all throughout, after which updates continue being daily until it caught up with the dA page. Since then they are updated with new designs and story elements simultaneously.

Unfortunately, Robbie Da Boo has now deleted his DA account, meaning that this story is no longer on DA, but his Tumblr is still up: https://godzillaadventureofficial.tumblr.com/archive

Tropes found in GA include: