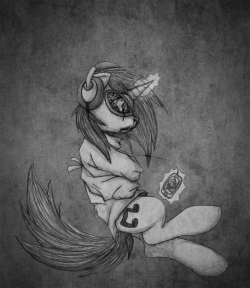 Can't Be Saved is a Dark Fic based on My Little Pony: Friendship Is Magic, written by Jimmy Lethal.

The story revolves around Vinyl Scratch, who has come across a song she can't stop listening to. Her obsession begins to go to the point where she begins to lose all four of her senses to power her sense of hearing, ending up leaving her a blind, immobile shell.

You can read the story here

. Has a sequel called Dimmed Spotlight which can be read here