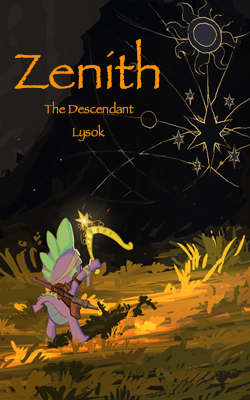 is a My Little Pony: Friendship Is Magic fanfic written by The Descendant.

Princess Twilight Sparkle and her Number One Assistant Spike discover a mysterious Artifact of Doom—and Twilight ends up placed under a terrible killing curse, and the only way to keep it from slaying her is to put her into a magical coma. And, with that, Spike's entire world falls apart. How will this terrible ordeal affect him, who is just a little kid? And is there any way he can save Twilight from the curse so that she can wake up? And why is Princess Celestia refusing to help him in any way?

The story is planned as a long epic. However, only Book 1 has been (almost) completed, and the story has been on hiatus since August 2014.