Fan Fic / This Nearly Was Mine 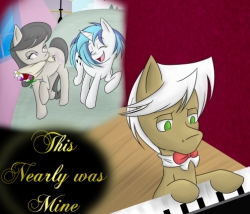 Because sometimes, you lose a girl to another girl.

Frederic Horshoepin is practically the paragon of professionalism. Stoic, polite, skilled, his compatriots rightfully believe he is one of the best pianists in Equestria. But underneath his collected exterior, he holds a burning secret: his love for his bandmate and longtime friend, the beautiful cellist Octavia. Will he be able to finally confess his feelings to her?

See, Octavia's already dating somepony else, the energetic DJ pony Vinyl Scratch. His door to the one he loves is closed, and the question is now whether his professionalism or his passion will triumph.

This kinda-sorta-Shipping My Little Pony: Friendship Is Magic Fan Fic can be found here

, and its continuation can be found over here