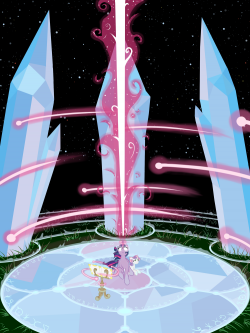 is a My Little Pony: Friendship Is Magic fanfiction written by Void Chicken

In present-day Equestria, Sweetie Belle collapses while playing with her friends, and is discovered to have an incurable heart condition which leaves her with only a few months left to live.

Desperate to help the filly, Twilight spends the next several weeks secretly researching and constructing an apparatus that will allow her to take Sweetie Belle hundreds of years into the future, at which point she believes that medical science will have advanced far enough to cure Sweetie Belle.

The time travel jump is successful, and Twilight and Sweetie Belle end up 350 years in the future, in an Equestria rather different from their own. Sweetie Belle is quickly given an operation to replace her defective heart valve with a mechanical one, which is a complete success.

There's only one problem; the time travel apparatus was destroyed in the process of transporting them to the future, leaving them stranded with no way to return to their own time. She and Sweetie Belle are now trapped in the utopian future Equestria, a world where technology has advanced far enough to be almost indistinguishable from magic.