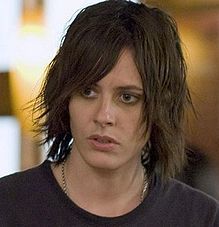 Katherine Sian Moennig (born December 29, 1977 in Philadelphia, Pennsylvania) is an American actress best known for her role as Shane McCutcheon on The L Word, as well as Jake Pratt on Young Americans. Currently, she plays Lena in the Showtime series Ray Donovan.

Moennig realized she's a lesbian as a result of her role on The L Word, and is married to Brazilian musician Ana Rezende. Blythe Danner is half-sister to Moennig's father, thus she's Gwyneth Paltrow's half-cousin. She has also been active in drawing attention to the plight of homeless LGBT+ youth.