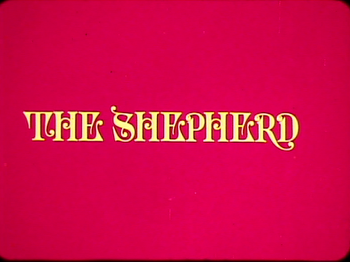 The Shepherd is a 1969 animated short film (7 1/2 minutes) produced and directed by Cameron Guess.

A man named Harry is a shepherd...in the big city. Why? Who knows, but it's "the only thing he knew how to do", and so he keeps five sheep in a threadbare apartment. The sheep are a problem—he can't get them on a subway car, they are an obstacle in his quest to find a job, and the cranky lady in the apartment below him hates the noise. Finally, after a voice from the heavens urges him, Harry changes his life.