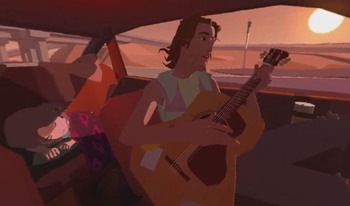 Pearl is a 2016 animated short film, directed by Patrick Osborne, the director of previous Oscar-winner Feast.

A little girl grows up touring around the country with her father, an itinerant musician. They spend years living in an old hatchback, playing on sidewalks and corners, as the girl grows from a small child to a rebellious teenager to an adult.

Made in 360-degree virtual reality, the view of the film can be manipulated by the viewer.