Webcomic / Demon of the Underground 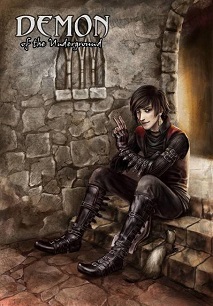 Pogo a year from now

Demon of the Underground is the story of Pogo, a big-mouthed young thief who falls through a hole in the ground and finds himself in a brutal underground world where survival is based on strength and intimidation. His only hope for escape is his telekinetic ability — and the help of a stray ferret named Annie.

The Underground's core foundations are power, pride, and brutality. Only the strong survive.

Pogo finds himself in the middle of a tug-of-war between all four spheres, who want him for different — and often sinister — reasons. In order to survive, he allies himself with Jasper Samsid, King of the East Sphere. Samsid is not helping Pogo purely out of the kindness of his heart; he's discovered Pogo's telekinetic abilities and plans to use them for his own benefit. He promises Pogo that if he helps him rise to the top, he will give Pogo his freedom - letting him return above ground. But will Samsid be true to his word? And does Pogo have the ability to move beyond the politics of the underground and form a true, loyal relationship with Samsid?

Demon of the Underground can be found here

Demon of the Underground provides examples of: