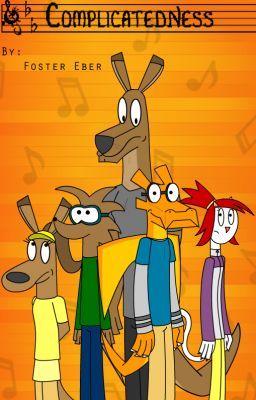 From left to right: Muzzy, Nolan, Ozzie, Ness, and Jess.
"Why is life so, complicated?"
"Well, what is life without complication?
If there was nothing complicated, then we would never learn.
Never grow. Never become better animals.
Complication is what life is Ness."

In the Summer of 2011 Foster Eber jumped off a 10 meter diving platform at a swim camp in Annapolis, Maryland. for the split moment that he was airborn, the idea of flying materialized into his brain. Fixated with the idea, he simply drew himself as a dragon.

The Character seemed to be more than just himself, and he began to create the plot for Complicated Ness soon afterwards.

The idea soon became and obsession, a story he had to tell to the world, but through which medium? First there were Simple Comic Strips, then Flash Animations, then a Novel, and then finally, it wrapped its way back to Full Page Comics located on Smack Jeeves!

The website for the comic can be found here.

Currently the web comic is on hiatus. This is due to the fact that Foster wants to be sure he's telling the story he wants to tell. The webcomic is still up on Smack Jeeves if you want to read it, but there is no news about an update or reboot at this time.

Ness Roo, The Last Orange Dragon left in the entire world, struggles to find out the difference between who he is, and who people think he is. Ness must overcome his fear of growing up, as well as his fear of his older brother Ozzie Roo (A Professional Football Playing Kangaroo). The power of music helps Ness to figure out who he is, who his parents were, and what his life was always meant to be about.