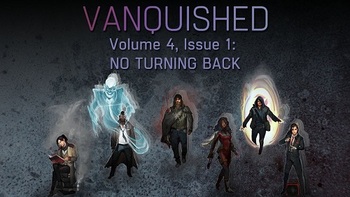 Broadcast from the Hyper RPG LA studio, Vanquished is a high-stakes action-adventure Actual Play RPG show based in the superhero universe of Valiant Comics, using a variant of the Valiant Universe The Roleplaying Game by Catalyst Game Labs. Five newly-born Psiots fight to survive against a shadowy organization that wants their utter destruction. In season 2, the show entered a partnership with Valiant Comics and became officially canon to the Valiant Comics universe.