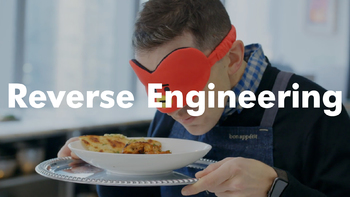 "I have, like, a bit of a wild guess in my mind, but I kinda don't wanna say it, 'cause then there's gonna be that [BEEP]ing graphic here that's like 'EEEHN!', you know? '[BEEP] you, Chris!'"
Advertisement:

Reverse Engineering is a Cooking Show released as part of Bon Appétit starring Test Kitchen Director and supertaster Chris Morocco. One of the test kitchen staff challenges a blindfolded Chris to examine a dish by a famous chef using only his senses of smell, taste, and touch. He then must spend the next two days attempting to recreate it, having never once gotten to look at the dish or be told what it is. Expect him to get remarkably close while being most confident about the wrong ingredient.